Clued-up Bangkok foodies know that the old town, in and around Banglamphu and Rattanakosin Island, is the place to go for some of the Thai capital’s very best street food. And one supremely underrated local fresh market, Nang Loeng, is home to what’s perhaps the very best of the best.

Set in a historic old Bangkok neighbourhood, and behind beautiful old townhouse-building which belong to the Crown Property Bureau, the market itself has been running for well over a century. This is very much an early bird’s market: Nang Loeng gets going in the early morning and, if you arrive much past lunchtime, all you’ll find are the last few stalls closing up. But if you can pull yourself out of bed on time, then you can expect a dizzying array of fresh goods and prepared foods that will have foodies dizzy from both the variety and quality. What follows is our guide to Nang Loeng.

The name of the Market “Nang Leong”, originally came from the word “E-Leong” which means Giant Pot (E Leong or Nang Leong Pot), as these were widely sold around this area. However, the word “E” is an impolite word in Thai, so we changed it to “Nang” which means Mrs. in Thai.

The community originated from Wat Kae or Soonthonthammathan temple before the beginning of the Padungkrungkasem canal construction in the range of King Rama III. King Rama III gave this land to the people who were in the war and emigrated to live in this area, mostly from the southern part of Thailand. This resulted in having many artist houses of performing Thai dancing and Khon in this area.

Later on, this market became an important part of the economy and the society. The Padungkrungkasem Canal played an important role by increasing the numbers of boats and people, leading to the first market on land “Nang Loeng”.  Nang Leong market was open in 1899 and was renovated in 2006 to be a proper food court.

The Nang Leong community is a mix of Thai and Chinese cultures that you could identify by many Chinese signs in front of the stores, a Chinese Shrine, and the food. However, you can find Thai Royal cuisine and desserts in this market as well, since the locals have passed the recipe generations to generations. They learned this recipe from the palaces of Nobel-men that surrounded the area in the past which now these palaces became government and public sectors.

Nowadays, Nang Leong market is perhaps not as lively as before since the local eating habits are changing, people prefer to sit in an air-con restaurant inside malls. However, the market is still active in the morning and lunch time because of the people who work around the area.  We still love it for a real authentic experience and include it as a stop on our Bangkok by Day tour.

At the heart of the market is with the large array of fresh fruit, vegetables, meat and seafood, much like many fresh markets around Bangkok – but it’s for ready-to-eat Thai dishes that Nang Loeng is particularly renowned.

Nang Leong is well-known for the authentic Thai dishes and desserts such as: Pla Nam (pork sausage with minced rice), which is rarely found nowadays; Sa Goo Sai Mhoo and Khao Krieb Pak Mhoa  (made from rice flour and tapioca flour filled with pork cooked with garlic onion); Thai dessert bites (banana, taro, and etc.). It becomes very busy and crowded during the lunchtime and on weekends.

Our Food Recommendations at Nang Loeng

The traditional restaurant has been around for more than 80 years and over 3 generations. “Jib ki” is super popular among the locals, They are specialize in roasted duck, barbecued red pork and crispy pork. Make sure that you arrive before noon, if not you will miss the roasted duck! Jib Ki still has the atmosphere of a traditional 80-year old restaurant.

This Thai dessert shop is serving has been selling for almost 50 years and spans 3 generations. The recipes were passed on since the owner’s grandfather who worked in the Royal Kitchen. You could find a variety of dessert made from fruits and vegetables likes banana, toddy palm cakes, taro and etc. The packaging of theses dessert is very interesting, they still using the traditional way of using banana leaf as a cup for dessert.

Thai people always have rice at least once a day and of course it is often eaten with all kinds of curries. In this restaurant, you will find various kind of curry and stir-fries served over rice. This includes Pa-nang (red-curry), Kang Kiew Wan (Green curry), Pad Pak (cooked vegetables) and the Kanom jeen Nam prik (Noodle with chilli paste sauce) which is only served on Thursday and Friday.

If you wander through Soi Nang Leong 2, you will be attracted by the smell of the soup from this restaurant. The smell of this noodle soup is very unique and tastes amazing. The owner has run this shop for more than 40 years, generation to generation.  Beef lover must add this shop to their Beef noodle list, the texture of the beef is very soft and it can be melt in your mouth. There’s always a line for both sit-in and take away, so be an early bird is recommended.

Other Things to See Around Nang Loeng

One of the most famous landmarks in Nang Leong is the Chaleormthani Theater which was first opened in 1918. Later, this theater was changed to Sala Chaloerm Thani at the same time with 6 other theaters and the it was closed in 1993. It is currently under restoration.

Back then when Nang Loeng was a famous area for entertainment, you could find The Royal Turf club, The Chaloerm Thani Theater and other casinos.  The Royal Turf Club is a legal gambling venue for Horse Racing for 102 years from 1916- 2018.  It was active as a horse racing course and a sport club consisting of golf course, swimming pool, tennis courts, badminton court and horse racing school. This area will soon become a memorial monument of King Rama IV and a public park.

How to Get to Nang Loeng

Whilst getting to Nang Loeng by taxi would be the most convenient way, taking a bus is the local way! You can take any bus that pass Lan Luang and walk for 10 minutes or taking a Saen Saeb Boat to Phan Fah Pier and then walk to the market for 15 minutes.

Whilst in The Area

Other than Nang Loeng Market you can also visit the Golden Mount (Wat Saket) which is about 10 minutes walk away. Climbing up the 318 steps to the Golden Mount could be fun to see the sunset at the top. The glided stupa at the top enshrining Buddha relics along with the magnificent 360-degree old town view.

Another interesting places is the Metal Castle (Loha Prasart), of which the 37 spired roofs made of metal and their spired roof signified the 37 virtues towards the enlightenment in Buddhist Cosmology. Inside of the Metal Castle, you will find the Exhibition about Buddha’s life story. At the topmost floor, it enshrines the buddha relics from Sri Lanka and it’s prohibited for normal people to enter.

If you would like to visit Nang Loeng market with a local expert, try something new and visiting temples,  you can check out our Bangkok by Day: Temples, Markets, Snacks and Local Transport. 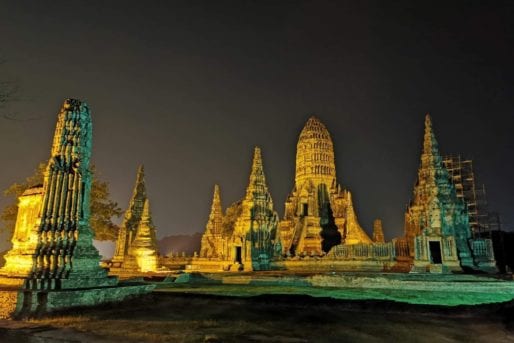 Thailand’s seasons: when is the best time to visit Bangkok? A Guide to Public Holidays in Thailand