Asanha Bucha Day is a significant Buddhist event and public holiday on the Thai calendar. The day, which usually falls in July or August and in 2016 takes place on 19 July, marks the anniversary of the Buddha’s first sermon over two and a half millennia ago. The sermon, which would later go on to form the basis of the Buddhist doctrine of Dharma, was given at a deer park – as a result, images of deer have come to be seen at Buddhist temples across the country. In common with other Buddhist holidays, the timing of Asanha Bucha Day is determined based on the lunar calendar. Also like other such Buddhist celebrations, Thai Buddhists will mark the day by visiting the local temple to make merit. This often takes the form of a donation to the temple, either in cash or – more traditionally, and specific to Asanha Bucha Day – in the form of candles, historically to be used to light the temple during the darker days of the rainy season in the pre-electricity era. This tradition also has links to the Candle Festival, held in cities including Ubon Ratchathani province in Thailand’s northeastern Isaan region, where intricate sculptures are moulded from candle wax to form depictions of Buddhist art and scripture. Processions take place in Ubon on Asanha Bucha Day and the connected Khao Phansa holiday, which takes place the following day (in 2016, on 20 July). Khao Phansa marks the start of the three-month Buddhist Lent period, also known as the Buddhist Rain Retreat. The Buddhist Lent marks the period that Buddhists believe the Buddha transcended to heaven and spent time with his mother. The two holidays combined represent a time of spiritual renewal for Buddhists, and for the three-month period of Phansa monks return to their home temple from any spiritually related travel they might have been doing. They remain there – often not even venturing outside of the temple grounds – for the full three months. It is a time for monks to devote themselves to study and meditation. Phansa is also a popular time for Thai men to ordain as a monk, whether for a period of weeks or longer. In addition, it is common to see boat races organised around this time, including in Bangkok and nearby provinces. These also occur on the occasion of Org Phansa, that celebrates the end of the Buddhist Lent period and marks the Buddha’s return to earth. As a visitor to Bangkok, you should note that a blanket nationwide ban on alcohol sales comes into force for both days of the Asanha Bucha and Khao Phansa holidays – including supermarkets, convenience stores, and often hotels, restaurants and bars.

Have you witnessed Asanha Bucha or Khao Phansa celebrations in Bangkok, or elsewhere in Thailand? Let us know in the comments! 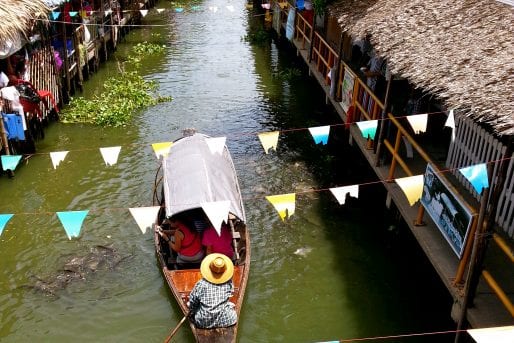 The Best Night Markets in Bangkok