Thai desserts don’t get the same level of attention that’s afforded to the savoury dishes such as pad thai, green curry and papaya salad that have made the country’s cuisine famous around the world. In fact, cookbooks and travel guides all too often write off Thailand as being a country that doesn’t indulge in dessert.

Nothing could be further from the truth – many a visitor to Bangkok and elsewhere around the country has fallen in love with treats like mango sticky rice and roti pancakes drenched in condensed milk. But there’s more to the Thai sweet scene than those more commonly spotted dishes – here are some of our favourite picks for those with a particularly sweet tooth.

If there’s one Thai dessert that sticks in the mind of visitors more than most others, it’s probably mango and sticky rice. That’s understandable, both because it’s a delicious dish in itself, and because it’s one that’s made its way to being served in many tourist-heavy areas in Bangkok and beyond – and indeed in Thai restaurants overseas – meaning it’s easy accessible. This is a twist on the sticky rice you might enjoy with your somtum papaya salad and other northeastern Thai dishes, and it’s topped with fresh sweet yellow mango and drenched in coconut milk.

These delicious, bite-sized nuggets of coconut-fuelled deliciousness are typically hawked from street carts, freshly prised from small porcelain cups or bowls and sold by the half-dozen. Kanom tuay are also a common sight at noodle soup stalls. They are wobbly, custard-like sweets, with a chewier coconut milk base beneath a thick layer of coconut cream on top – all flavoured with the subtle hint of pandan leaf. They are the kind of dessert you only mean to have one of, but end up scoffing the whole box.

While ice cream might strike you as something of a westernised cheat’s version of a Thai dessert, in truth coconut ice cream has long been a favourite sweet treat in Thailand – served in anything from a plastic pot to a coconut shell, or perhaps sandwiched between two slices of slightly sweet bread, and almost certainly enjoyed with toppings ranging from sweetcorn (yes, sweetcorn!) to sticky rice and peanuts. But when you bring into the equation the infamously pungent fruit durian – that many people are afraid to try even as it is, let alone as ice cream – things elevate to a whole other level.

The result is a meaty, flavoursome delight that actually somewhat mellows the flavour of the durian rather than strengthening it (though its unmistakable stench and flavour is still there!) Our favourite place to tuck into durian ice cream is at Nuttaporn ice cream parlour in Bangkok’s old town – but you have to be lucky, since they only make it while fresh durians are available and at their peak, which in reality means a very narrow window each year.

As a dessert, bua loy comes in a number of variations – but what’s consistent are the bua loy themselves, which are dumpling-like balls made of rice flour. You’ll find them filled with everything from taro to sesame seeds, and served in a sweet soup or stew that ranges from a simple coconut milk base to a much more pungent and aromatic ginger broth. One of our favourite versions – and one which we frequently encounter on our Evening Food and Tuk Tuk Adventure – is bua loy nam king, made with bua loy rice balls filled with black sesame seeds floating in a sweet, slightly spicy ginger soup. It’s addictive!

These addictive little morsels are another Thai dessert staple that make it all too easy to pile on the pounds – and if you’ve ever been to the infamous Bangkok shopping centre MBK, and in particular made it up to the fifth floor, then you’re already familiar with the unmistakable odour of kanom buang being produced en masse. Looking like something of a cross between a small taco shell and a crepe, kanom buang are loaded with all sorts of sweet and savoury toppings; most commonly meringue-like cream and a stringy sweet made from egg yolk known as foi thong, but also less obvious accoutrements like fried shallots and coriander.

There are a seemingly a million and one variations on desserts made from the base ingredient of sticky rice, and khao niao sangkaya is but one – but it’s one of our favourites. Sangkaya is a thick, eggy, custard-like concoction, that’s sliced up and slapped on top of a healthy portion of sticky rice sweetened with a coconut milk syrup. It’s another one that’s heavenly and addictive in equal amounts!

Kanom krok are another example of a dessert staple at local markets and on street corners up and down the country. They are also another example of Thai desserts that – perhaps counter-intuitively for those coming from other cultures – mix concepts of sweet and savoury ingredients to winning effect. Kanom krok are, at their core, dumplings made from rice flour that are then grilled with a coconut-based filling. But it’s the toppings that make kanom krok what they are – expect to find them decked out with the likes of taro, sweetcorn and onion.

Regular roti pancakes might be the daily fodder of hundreds of thousands of the tourists that flock to Thailand each year, but we think they are missing a trick – because roti grob, or crispy pancakes, are everything that regular roti are, and then a million times better. A southern speciality, roti grob arrive at the table as huge plates of overly crisped-up roti pancakes, smashed into a number of pieces and piled into one delectable mess before being absolutely smothered in condensed milk. They’re divine – even if they perhaps ought to come with a health warning – and are best enjoyed with a cup of hot tea laced with, you guessed it, more condensed milk.

Which of these Thai desserts is your favourite? Let us know in the comments! 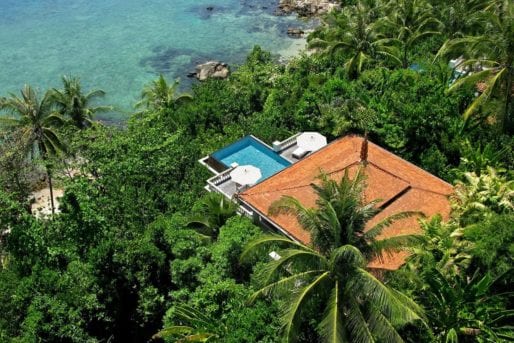